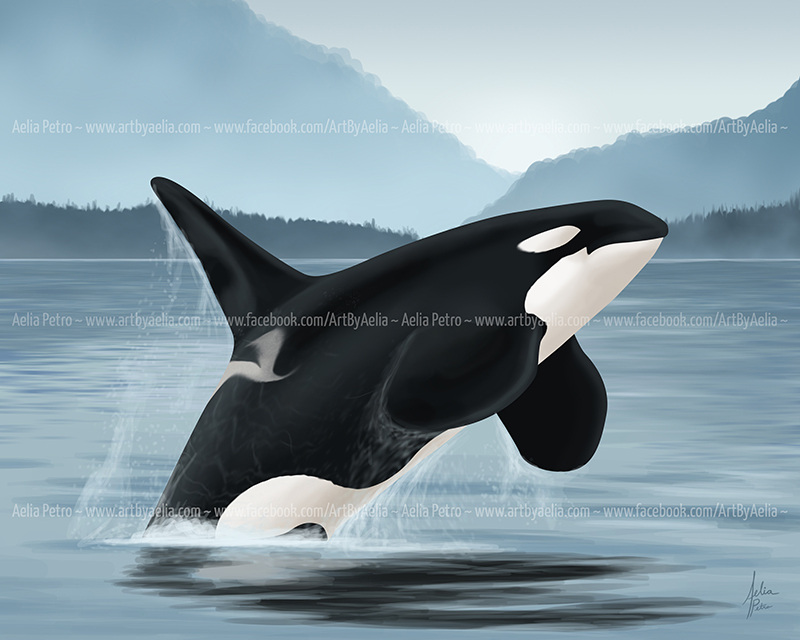 Prints are available in 2 sizes, 5x7 and 8x10. Only 25 will be printed in each size, it will not be reissued, so if you like it, be sure to act before they are sold out!

Prints will not have the watermarked pictured here. I will individually hand-sign and hand-number each print on the back.

***Be sure to follow me on Facebook, Instagram, Tumblr and Twitter to stay up-to-date with the Daily Doodle Feature! Each weekday I'll post a new sketch and at the end of the week the sketch that received the most likes in its first 24 hours will become a digital painting!

***Also available as a button and keychain.
The Southern Resident Killer Whales are the only population of orcas that are considered endangered by the U.S. Fish & Wildlife Service. Made up of J, K and L pods, their population hovers precariously around 80 individuals. Their existence is threatened by a decline in prey populations (they are fish eaters, and fish populations are declining), pollution (these individuals are among the most contaminated marine mammals in the world, due to toxic chemicals accumulating in their tissues) and the effects of marine traffic (noise and crowding of vessels interrupt their hunting patterns, and the sonar used by some ships and submarines can cause hemorrhaging and even death).
Add to Cart